Today’s society (and business) runs on connectivity – it has become the fourth utility. From commercial buildings to retail complexes, healthcare facilities and college campuses, the occupants/visitors demand and expect the very best in Wi-Fi and cellular access. And for companies that are moving towards BYOD (bring your own device) and away from landlines, service is paramount.

Yet ensuring connectivity is not without its challenges. Building structures and the materials used often create dead zones where connectivity is sporadic; the coverage depends on location. The number of users on a network can fluctuate dramatically depending on the building usage. And most importantly, the number of wireless carriers being used varies dramatically as well.

While Wi-Fi and cellular are both a part of in-building wireless connectivity, their strengths and weaknesses make them different in their application, effectiveness and use. In this Q&A, we’ll explore some of the key concepts in the Wi-Fi versus Cellular connectivity discussion. 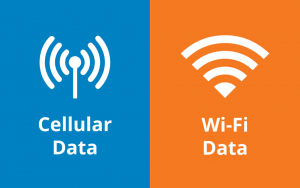 What exactly is Wi-Fi in-building wireless solutions? Wi-Fi is a local area network (LAN) that provides internet access within a limited range. It provides means for users to connect to the web. Devices exchange data from the internet using 2.4 GHz  and 5 GHz unlicensed frequency bands. Although Wi-Fi networks do not have a long-range- approximately 300-feet, they can provide the bandwidth necessary to stream video and audio from phones, computers and tablets, use cloud-based applications and other important consumer- and business-facing applications. The standards for Wi-Fi are continually changing as requirements for bandwidth continue to increase.

What is the difference between Wi-Fi and cellular in-building wireless solutions? Cellular is a wide area network (WAN) used to connect also sorts of devices including smartphones and it has far greater range than Wi-Fi. Mobile networks connect to the internet through a series of base stations that have fixed transceivers to receive and send radio waves. A common problem with cellular networks is that radio signals are often blocked from reaching inside because buildings constructed with materials like concrete, glass and metal which inhibit cellular signals and lead to poor cellular signals.

There a number of solutions that facilitate in-building cellular, all of which come with different costs and benefits. A distributed antenna system (DAS) connects directly to a carrier’s signal source and distributes the signal throughout a building. This signal source transmits and receives the mobile network operator’s licensed radio frequency through strategically placed antennas.

What exactly is Wi-Fi calling? Instead of using your carrier’s network connection, your phone can make a voice call via a Wi-Fi network. This is the same Wi-Fi connection you have set up at home, or whatever Wi-Fi hotspot you happen to be on when you’re out and about, such as at a cafe or library. In most ways, it’s like any other phone call, and you still use regular phone numbers.

What carriers and phones support this service? These days, you can find several phones on Verizon, T-Mobile, Sprint and AT&T, that have built-in Wi-Fi calling capabilities.

On T-Mobile, the majority of new Android phones offer Wi-Fi calling built-in, while AT&T has 35 phones in its lineup. Most phones on Verizon are capable of Wi-Fi calling, but it’s unclear exactly how many phones in total have it. The carrier also specifies you must have a phone that has both Wi-Fi calling and HD Voice enabled to be eligible for Wi-Fi calling.

As for Sprint, it offers Wi-Fi calling on several Android phones too, in addition to iPhones including the 5C and newer. But while Android and iOS after 2016 have no restrictions, phones that launched before that year may not be able to make outbound calls outside Sprint’s coverage areas (incoming calls may still be available, however).

Do I need a fast Wi-Fi connection? Though the higher throughput you have the better your connection will be, a minimum of 1Mbps should be enough to patch a solid call through. Republic Wireless reports that it can hold a call with 80Kbps, but the quality may decrease and you’ll experience more dropped calls as well. Keep in mind that the number of people currently using a Wi-Fi network and what they’re doing (20 people each streaming a 4K video, for example) may also affect your signal strength.

Why would I want that? Wi-Fi calling is especially useful when you’re in an area with weak carrier coverage. For example, when you’re traveling to the residential countryside home, or you’re in a building with spotty reception. You may already be familiar with using Wi-Fi to send messages when SMS texting is unavailable (iPhone users will be familiar with their native blue color texts from imessage, and apps like Kik and Messenger also provide these services) (Android) and the same applies when you’re trying to place a call. With Wi-Fi, you can call a friend up even if you’re in a dingy, underground bar (assuming you can connect to the bar’s Wi-Fi, that is).

Why would I NOT want that?

The reality is that neither WiFi, nor cellular can cover all the connectivity needs of your business. The question really is not Wi-Fi or cellular but rather how to do maximize each to their fullest potential. That is where Distributed Antennae Systems (DAS) come in. To learn more about Parallel Technologies’ DAS offering visit our website or contact the author at pleaf at ptnet.com