Separating the Wheat and the Chaff of Elevated Temperature Monitoring 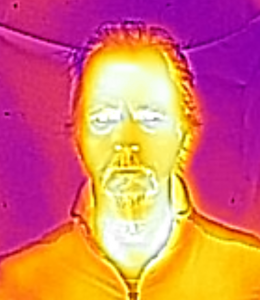 Since the outbreak of SARS, and more recently COVID 19, there has been a large spike in the numbers of companies and manufacturers that offer infrared temperature scanning systems.  This referred to as Elevated Body Temperature (EBT) detection.  Some have been interesting and worth a serious look, while others are not.  The challenge is sorting out the “wheat from the chaff” so to speak.

This article provides a framework of what infrared (IR) is, thermography, the history of IR imaging technology and excerpts from the international IEC and ISO standards related to use in medical screenings.

To begin, let’s get to understand infrared a little better.

Infrared is a part of the electromagnetic spectrum that has a longer wavelength than visible light and cannot be detected by the human eye.  Sensors that can detect the infrared spectrum are divided in to two sub spectrum categories of Shortwave (SW) 3-5µm, and Longwave (LW) 8-12µm.  Infrared radiation, like visible light radiation, can be absorbed, reflected, refracted and emitted.  Objects emit IR as a function of their temperature, therefore the higher the temperature the more IR radiation emitted.  IR cameras do not see the temperature of an object, they detect IR radiation.

IR Thermography is the way the IR spectrum is presented as a visual image.  An IR camera detects radiation and represents the amount of radiation in the visible light spectrum on a display. This is also referred to as a thermograph or thermogram.  IR cameras can also assign “false color” to a displayed image making it easier to interpret.

Radiometric cameras are able to measure temperature at every pixel in the image, which is critical in accurate quantifiable temperature measurement of the human body.

Infrared was discovered in about 1800 by Sir William Herschel.  In 1880 the first bolometer was invented. In 1929 the British invented the first infrared sensitive camera use in antiaircraft defense.  Between 1950 and 1960 saw the development of single element line images. 1978 FLIR was founded as IR imaging systems provider. In the 1980’s microbolometer technology was developed. 1994 saw Honeywell receive a patent for the microbolometer, which is the foundation of the imaging technology used today.

How is infrared radiation detected?

How is it measured?

Infrared camera sensors measure heat without contact using a microbolometer.  A microbolometer is an infrared sensor which when exposed to IR, produces variable electrical resistance that is representative of a temperature value.

Since a microbolometer can only provide one value for the temperature area it is exposed to, the resulting measurement is inherently averaged within that range.  One sensor exposed to a wide area of varying value will be less accurate than 100 sensors measuring that same area.  The higher the number of pixels per area measured relates to higher the temperature accuracy of that measured area.

The number of pixels required for an accurate measurement is referred to as the Measurement Field of View (MFoV) and should be no less than 3×3 pixels in a thermal camera.

Electronics without exception have inherent tolerances and will have electrical property variations from device to device, even if that tolerance is very small.  Therefore, if there are more sensors with a high accuracy tolerance on a target and all have the same relative values, it can be assumed that the temperature value represented is valid.

Additionally, microbolometers are subject to electrical “drift” and need to be regularly reset to a known uniform value in a process known as Flat Field Correction (FFC) or Non-Uniform Correction (NUC).  This correction is done automatically and can also be executed manually prior to a measurement which helps to insure the highest accuracy possible.

How does this relate to infrared scanning for an elevated temperature in a human?

The temperature of the human body in best taken internally by oral thermometer or similar method.  Measuring an accurate internal temperature from the outside of the body is best done at the inner corner of the eye, commonly referred to the tear duct area or the caruncle.  The reason this spot is most ideal is that this location is closest to the Carotid artery which lies just beneath the surface.  The blood flow through this artery creates a constant temperature closely representative of the core body temperature.

The caruncle is a small area of the corner of the eye requires that a high resolution camera will provide enough thermal pixels on the area to provide an accurate measurement.

The caruncle is also a relatively thermally stable and is not as subject to outside influences like wind, rain, or perspiration as the area of the forehead would be.

Factors that may adversely affect infrared measurement of the human body include:

·         Exertion – climbing a flight of stairs, carrying a heavy load, walking or running.

·         Outside ambient temperature – consider summer in AZ or winter in MN.

·         Ambient Temperature Must Be Controlled, Ensure No One Is Sweating

·         Fever Cams For Use “Under Indoor Environmental Conditions”

It is also stated that the FDA has endorsed these standards.

Infrared is a science and can be measured quantifiably.  The goal of a scanning system should be carefully considered and well defined.  If the goal is to accurately measure temperature, the information contained here, the IEC / ISO standards and reputable infrared training (such as FLIR Infrared Training Center) should be considered and applied as a critical evaluation on the technology platform before it’s purchased.

So before purchasing an infrared system it is important understand the technology, and ask good questions regarding the environment and electronics in order to separate the wheat from the chaff.

·         Does the system have sufficient thermal resolution to accurately measure the small caruncle of the eye from 2 meters or a minimum of 3×3 pixels on that target?

·         Does the system thermal calibration include the use of a “black body” thermal reference?

·         Does the system have thermal limit alarming for suspected over temperature detection?

·         Do the instructions for the installation of the system align with the IEC/ISO standards?

Companies want to keep their customers and employees safe and that presents opportunity.  Manufacturers want to provide a solution to meet that need and are eager to sell products.  Carefully list the parameters you expect to achieve using IR for EBT, then match technological solution that achieves those goals.